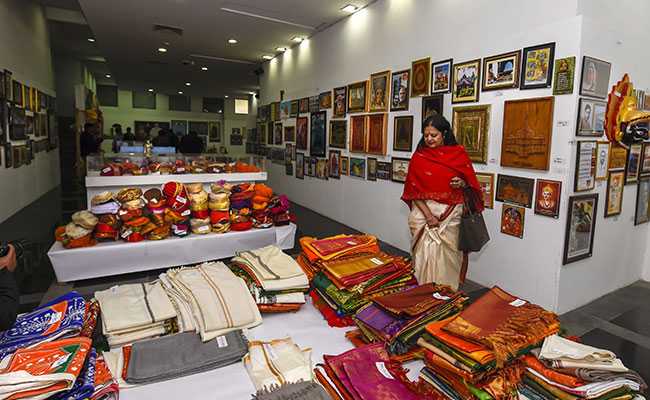 Gifts given to PM Modi on display at the National Gallery of Modern Art.

About 1,800 mementos gifted to Prime Minister Narendra Modi since 2014 were auctioned at the National Gallery of Modern Art in New Delhi today. The amount raised by the auction will be used for the National Mission for Clean Ganga Project, organisers said.

Reflecting the diverse cultural fabric of the nation, the on-sale objects include swords, musical instruments, turbans, shawls, traditional jackets, bows and and photographs of historical and political figures. Railway Minister Piyush Goyal was part of the auction.

Sold with a base price set by the Prime Minister’s Office and the Ministry of Culture, the live auction began after a-three month long exhibition, where a few hundred presents are kept on rotational view at all times.

“Initially slated to be auctioned in October 2018, the sale of the presents was delayed,” NGMA Director General Adwaita Gadanayak told news agenc IANS.

Out of the 1,800 objects, over a hundred were auctioned off in just the first half, with pictorial representations of the Prime Minister gaining popularity among the bidders.

Among the mementos that sold for the highest was a Thangka wall hanging (sold for Rs. 12,500), a miniature statue tribute to the Statue of Unity (sold for Rs. 11,000) and a painting depicting Mahatma Gandhi, Swami Vivekananda, Sardar Vallabhbhai Patel and Narendra Modi, which went for Rs. 9,000.

The auction, which had no buyer’s premium and no Goods and Services Tax (GST) applicable to the purchases, also sold off a Gautam Buddha statue for Rs. 10,000, a silver-plated seven-horse chariot sculpture for Rs. 5,500, and an illustration titled “Navarasa Nayak” showing Modi in nine different avatars, for the same amount.

The replica of a coin issued by Baba Banda Singh Bahadur (1710 AD) and presented to the Prime Minister by the Delhi Sikh Gurdwara Management Committee also went for Rs. 5,500.

The live auction will continue till Monday. An e-auction of the more expensive items along with the remaining ones, will take place from Tuesday to